Today, there is once again a protest in front of the mayor’s residence. The group gathers around two L.A.P.D. officers and shouts pointed questions at them: “What are you doing to change?”; “Why do you keep killing us?”

Suddenly, a wave of excitement runs through the group: the city council has just announced a $150 million cut to the police budget. Almost all the protesters are in their twenties and teens—some are nodding and are celebrating a victory. Others consider this insufficient, a mere PR operation (public spending on a police force that is designed as a military containment and suppression force against the subordinate sectors of society remains at $3 billion, over a third of the municipal budget).

The debate becomes furious at times, with contrasting opinions dividing the group—but everything coalesces around a single rhythmic chant: “George Floyd!”

BLM is a horizontal movement, and the protests are arising spontaneously: they appear every day at dozens of different places in this near-endless county, from the extreme northern edge of the San Fernando Valley down to Orange County, 100 km to the south—Costa Mesa, Newport Beach, Dana Point—the beating heart of Republican California, rich and white.

The major development this time is the participation of whites (as well as Asians and Latinos) alongside blacks: after Spike Lee pointed this out last week, Barack Obama and Al Sharpton also did so during Floyd’s memorial.

These kids, many still in high school, are drawing up a new geography of dissent, of disdain for a history that they see as too toxic and stifling. The previous divisions—by skin color or gender—no longer have any meaning.

There is a chaotic vital energy, and at the same time decisive—one might call it a revolutionary one.

This is not the time for political or ideological lines, but for pure indignation. It’s as if a generation was suddenly the first to see the open wound—although it was highly visible before—and to have called it by its true name, all together, and said: enough! In the White House-turned-bunker, the nakedness of the Emperor and his thugs is more and more visible. 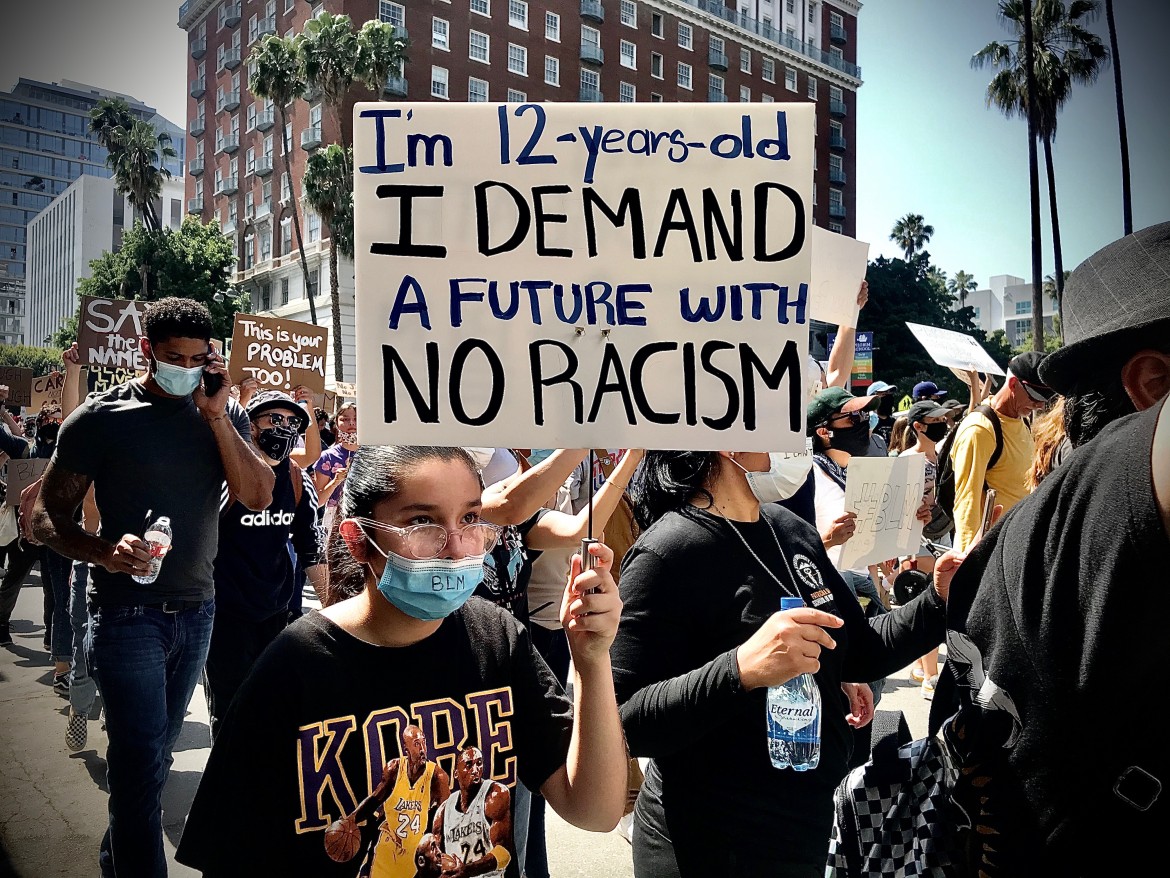 Now, the group is starting to move north. But no—after a brief discussion, they change course: they go east, towards the center, where a number of groups of protesters are already reaching the town hall.

There are no organized marching routes or permits. Each demonstration is the result of the collective will—or of messages sent via apps. They are formed on short notice, and there are not enough helicopters, nor enough police, to follow them all.

This group of protesters goes down Wilshire, the great avenue of the city. In front, volunteers on motorbikes are closing the intersections and directing the traffic—there is not a single police officer in sight. The march is entirely self-managed. There are bicycles in the group, some have skates on, and there are also cars with supplies—some girls are distributing small bottles of water.

On the construction sites along the way, the workers stop for a moment and show their fists in solidarity, as do many shopkeepers and employees along their route. A fist emerges from almost every passing car, and the drivers honk their horns in support. 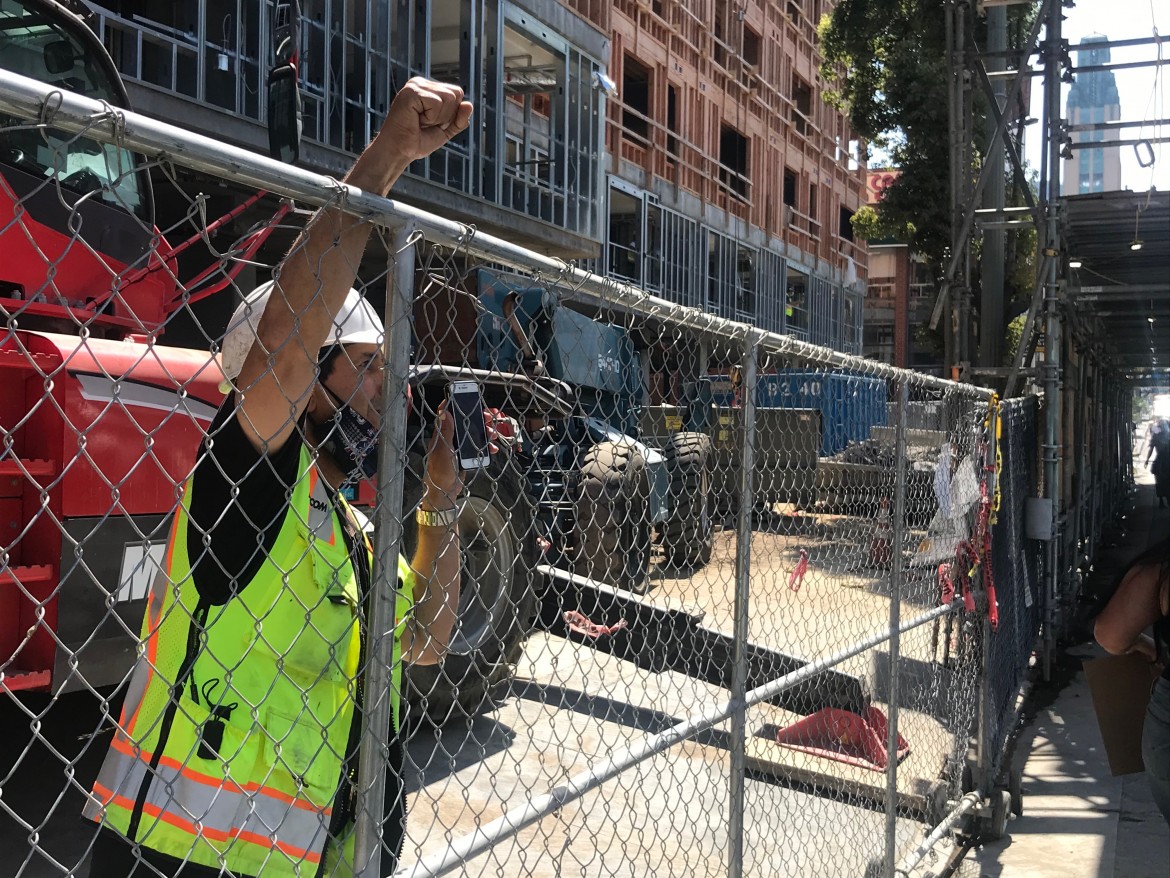 At an intersection, the march stops. Via megaphone, the protesters ask everyone to kneel down—there is a minute of silence in memory of George Floyd, with heads bowed and fists held high.

Then, the emotion is channeled into another chant: “No Justice, No Peace!”

Most likely, no one even knows that those words were also the call to arms of the ‘92 riots—from the look of it, one would say that almost none of these protesters were even born at that time. 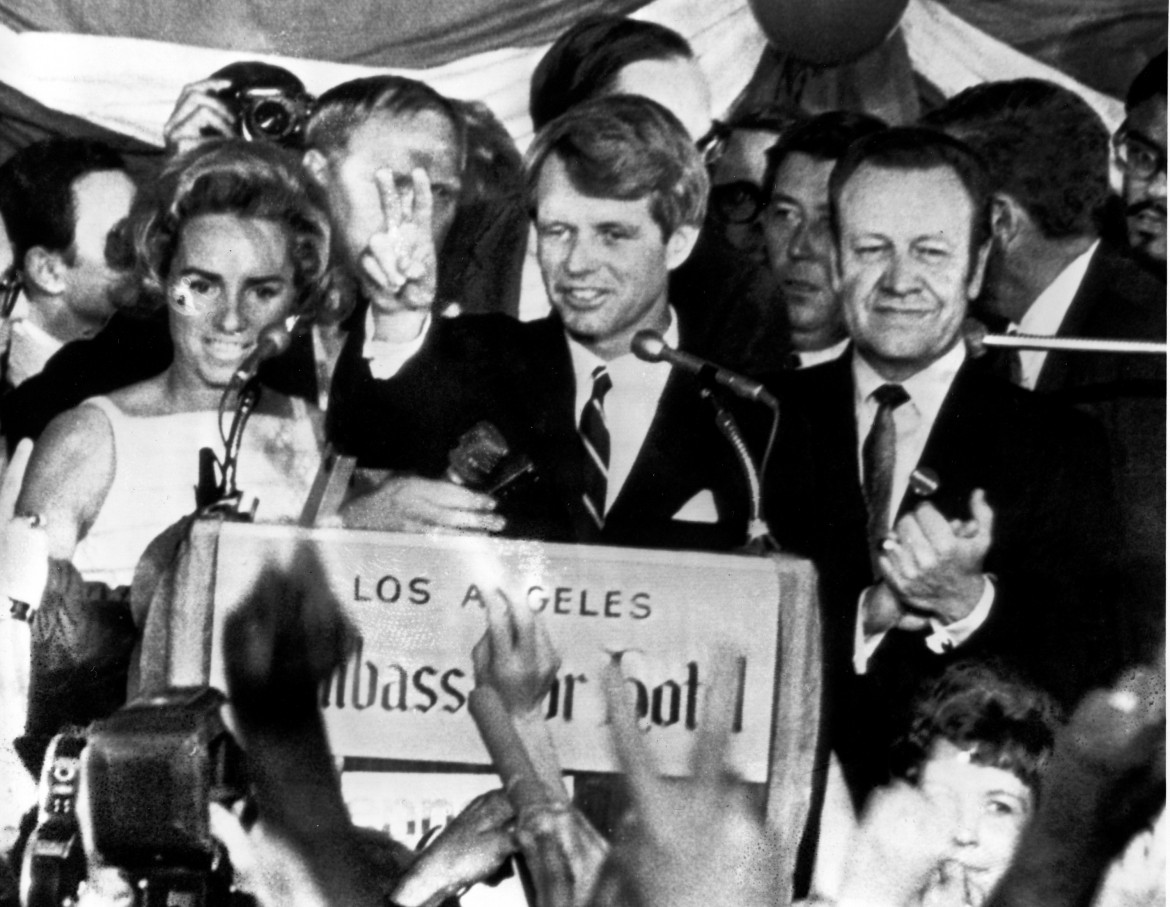 We’re in front of the Ambassador Hotel, the site of Robert Kennedy’s assassination in 1968. Could this be a mere coincidence? I point this out to a few people: “A man was killed here who called for similar things as you do.” I get an “I didn’t know that” and a lot of blank stares.

I suddenly realize that this is not the moment for memory, but instead—if anything—for a leap forward into the future.

Paradoxically, historical and ideological naivety can be a strength for this movement that is projected into the future. As Amanda Jo Goldstein, a Berkeley professor, wrote the other day, it’s “the feeling of looking at something risky and wonderful.”

And it is indeed like that: there is the dizzying atmosphere of sheer possibility in the air, the liberation from the ballast of a thousand hypocrisies that is releasing the seemingly unlimited energy that is the essential driving force of change.

This vital explosion is all the more striking because, springing from the deadly silence of two months of lockdown, the contrast makes the movement even more tangibly present and exuberant, especially now that it is taking the form of spontaneous assemblies, with storytelling and music.

At a certain age, one doesn’t have the memories of other movements, other debates, other times when campuses were occupied. It is the intoxicating process of a generation raising itself into awareness.

As Joyce Carol Oates tweeted: “thrilled to see such sights … NYC has gone from being a city like a ghost town to a metropolis thrumming with life, unity, spiritual uplift.”

It will take all of that and more to sweep away centuries of injustice, in the full knowledge that those sad men clinging to their guns and Bibles will use all the violence they are capable of to stop it.

But now we can see a movement that is capable of resisting them.