The Monument Valley Health Center in Oljato is almost certainly the clinic with the most impressive view in the world. The modest building is located near the northern entrance of the Navajo reservation, between Mexican Hat and Kayenta, right on the border between Utah and Arizona.

From the windows overlooking the red landscape you can see the breathtaking mesas of the Monument Valley, which are photographed to excess by the continuous flow of tourists who normally crowd the small road leading to the valley that was made famous by John Ford’s westerns.

Today, the road is deserted, and the only human presence consists of the people in cars who are lined up for the swab test. The small clinic is one of only a dozen health facilities that serve a population of 350,000 Navajo (who call themselves D’ineh, “the people”). 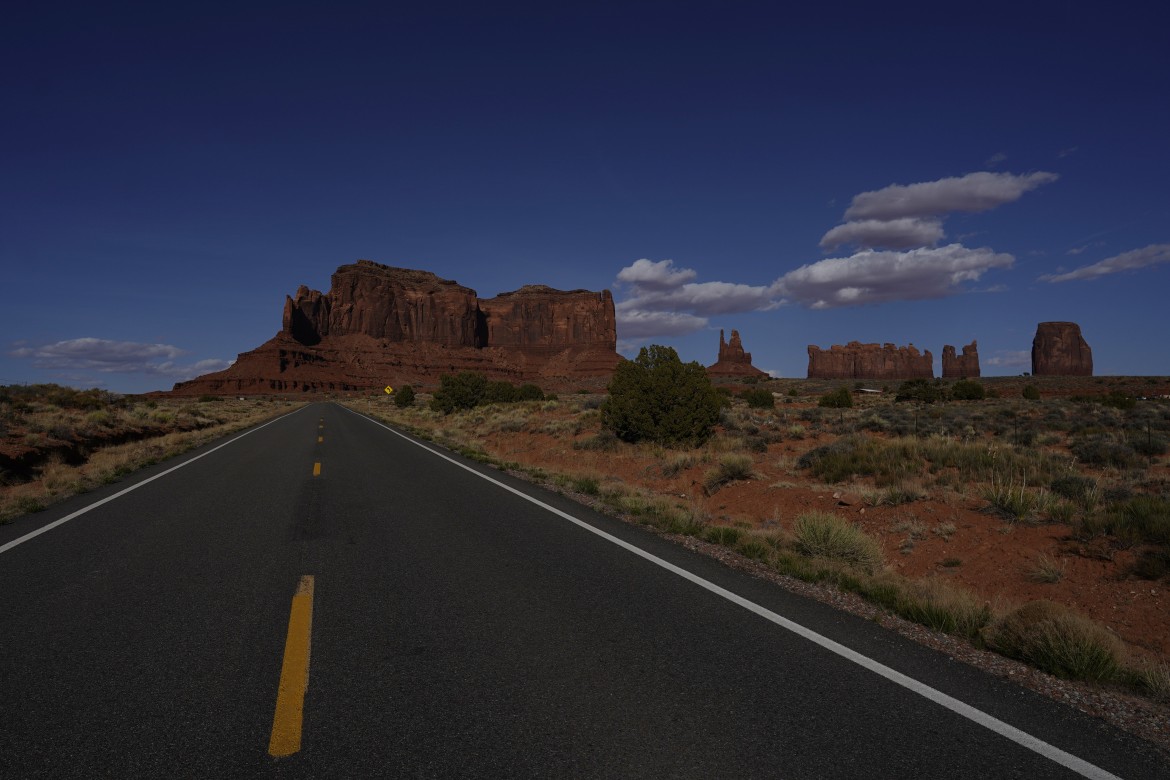 Beauty and miserable poverty are the defining traits of the Navajo Nation, the common name of the reservations where the two and a half million Native Americans are practically confined, prisoners of the most abject misery in a country where poverty in all its forms can be seen everywhere. 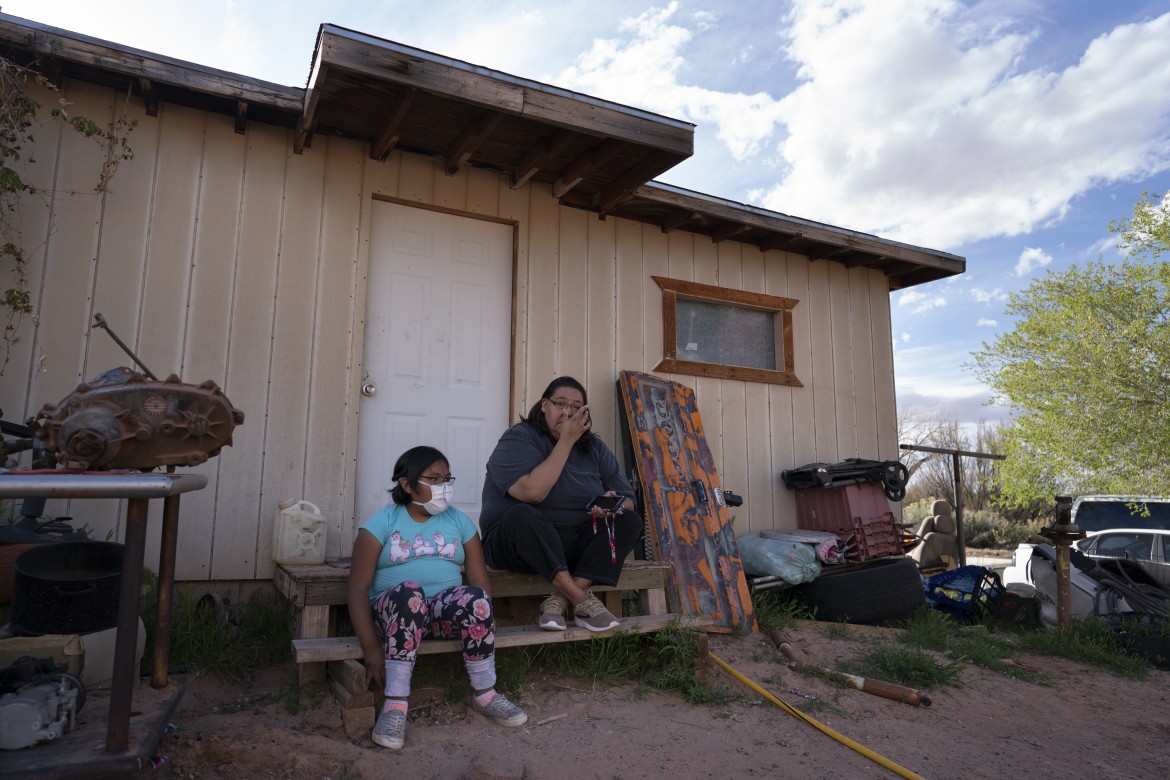 The unemployment rate on the Navajo reservation (straddling Arizona, New Mexico and Utah) reached peaks of 50% even before COVID. However, the pandemic added a macabre twist to the economic collapse.

In recent weeks, 3,100 positive cases have been detected in the reservation and more than 100 deaths have been recorded. For comparison, the Navajo Nation has a mortality rate second only to New York, New Jersey, Connecticut and Massachusetts.

In New Mexico, the Navajo make up 1% of the population but account for 57% of the cases in the state, and the proportion is similar in Arizona. 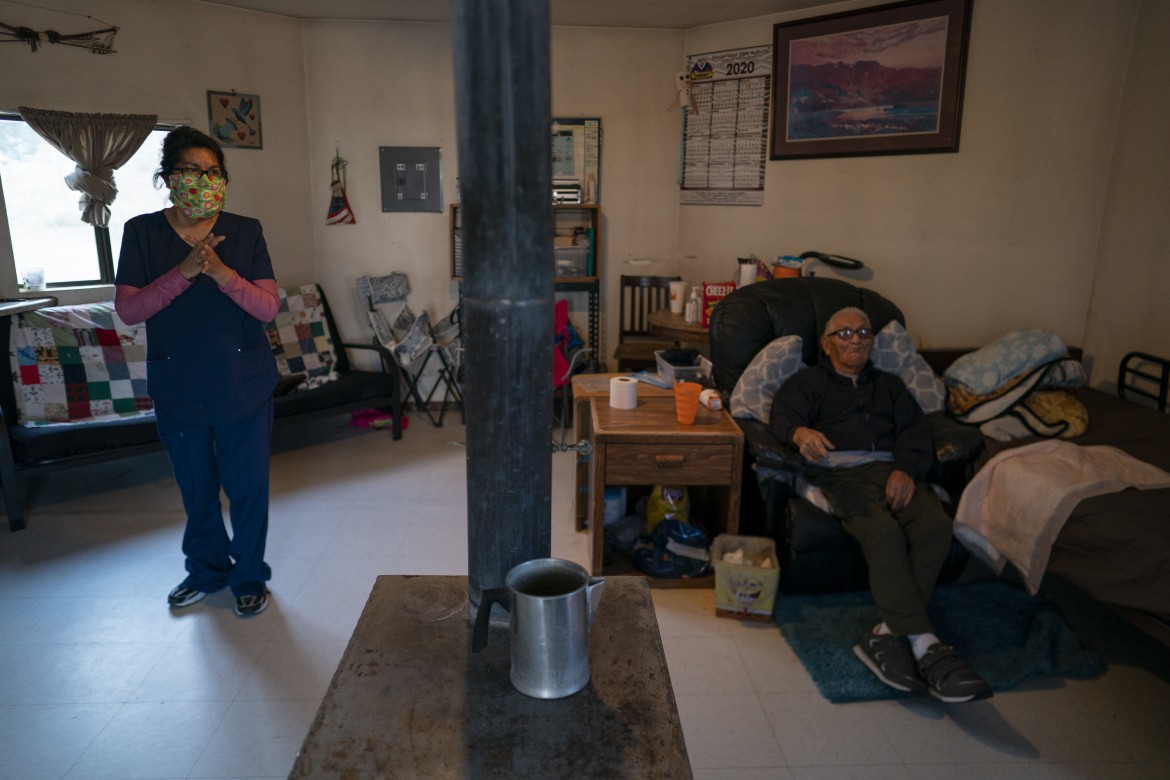 The Charley family in their house (hogan) in Chilchinbeto, AZ – photo from AP

The enormous reservation, about as large as Ireland (70,000 square km), is certainly not densely populated, and most of the roads are still unpaved. People live in small remote communities, prefabricated houses or isolated caravans on a plateau where 30% of the homes lack running water.

COVID took root here mainly thanks to a clan meeting in early March in the rural community of Chilchimbeto, in the north-western corner of the reservation. After the ceremony, the many families present brought the contagion back to their places of residence, small houses where several generations often live together.

By the time the first symptoms began to appear, the authorities had imposed social distancing and curfew measures, but it was already too late. 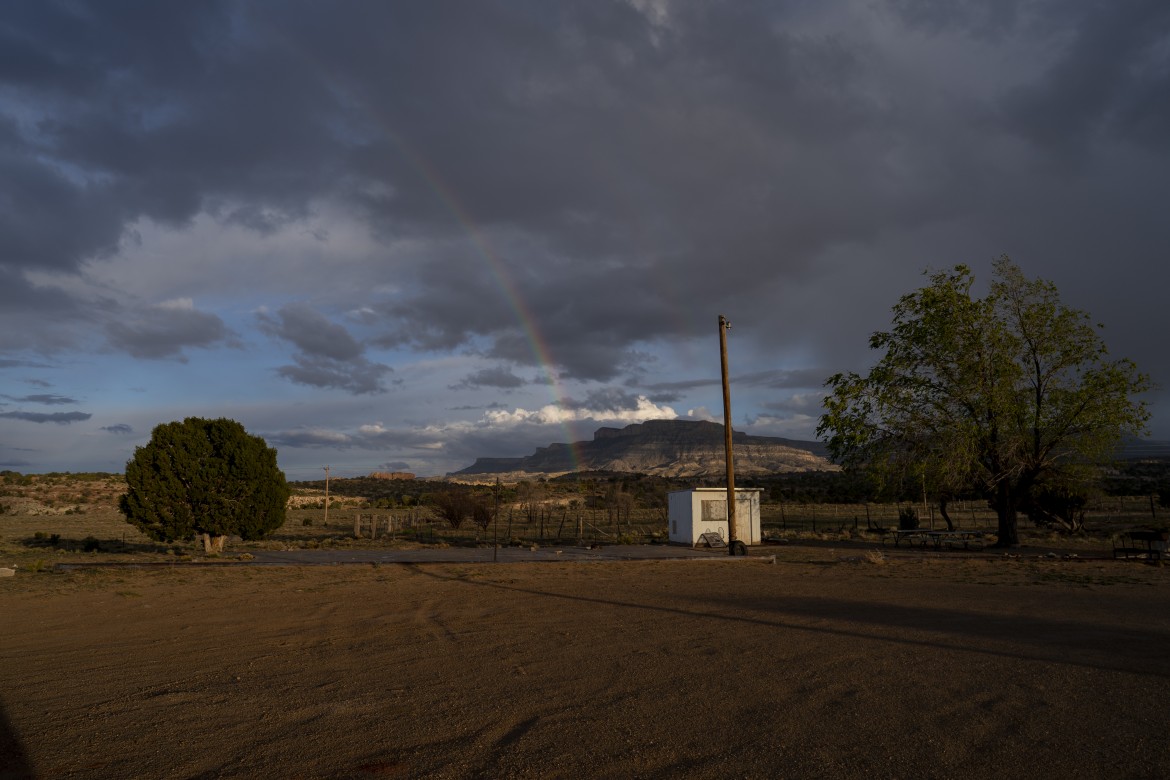 On the weekends, Gallup—the first town you come across when exiting the reservation eastbound along Interstate 40, in New Mexico—is usually full of Navajo spending their paychecks in bars and liquor stores. On Saturday nights, countless men are usually seen sobering up on the sidewalks, the image of the havoc wrought by alcoholism among the natives—and of the cynicism of the alcohol dealers, who regularly operate just outside the major reservations.

For a population of 22,000, there were more than 1,500 COVID cases in Gallup in early May, forcing the mayor and governor to impose a strict lockdown including a curfew every day from 5 p.m to 8 a.m. 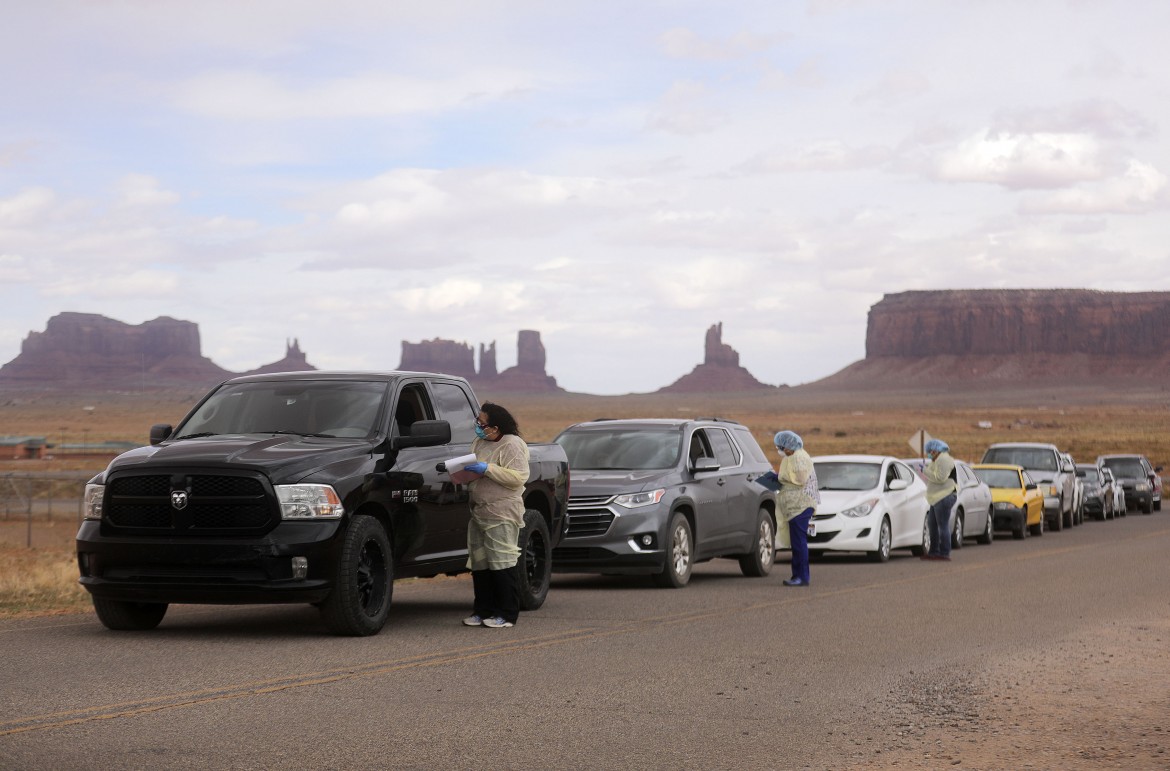 Swabs for COVID-19 – photo from AP

In the reservation, the situation is aggravated by the scarcity of facilities and resources, resembling sub-Saharan Africa even in normal times. It is also aggravated by the precarious condition of public health, characterized by endemic asthma, obesity and diabetes (and, in D’ineh land, by diseases related to radioactive waste left behind by uranium mines). 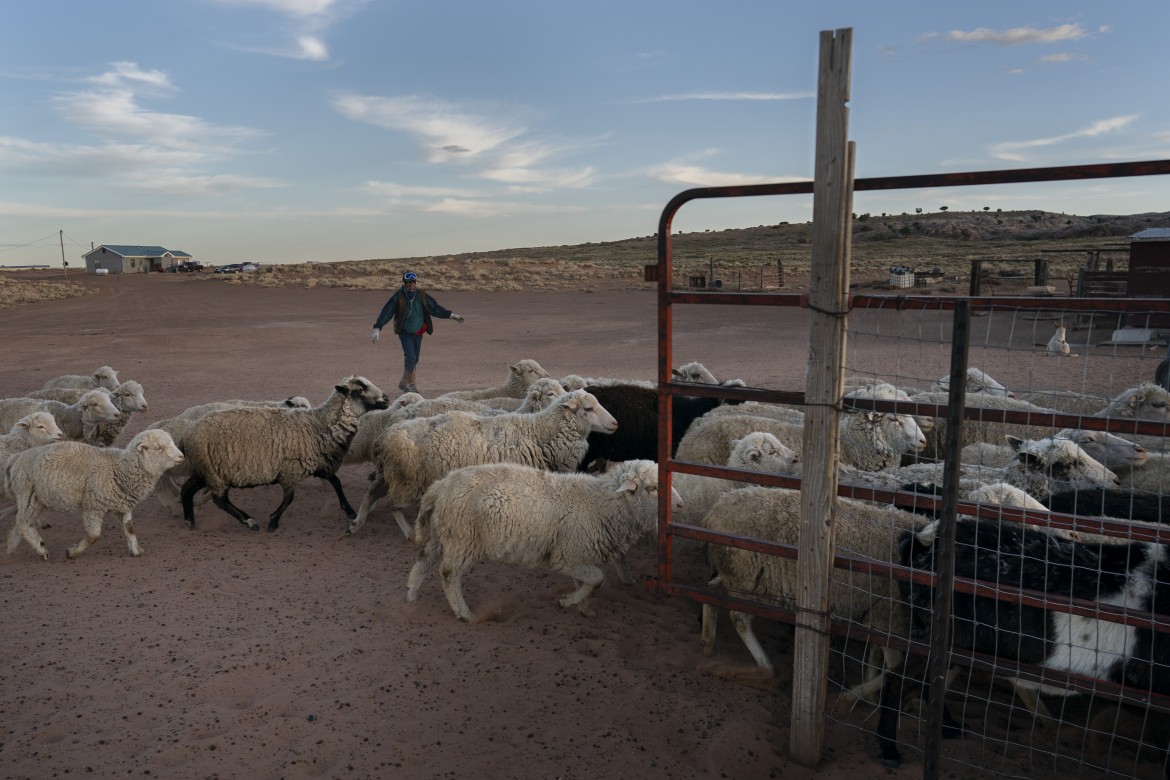 This context puts the population at even higher risk of COVID, and explains why Médecins sans Frontières sent in a team of doctors, nurses and water supply experts last week to assist in the operations. The NGO team will assist local authorities in alleviating the “significant health inequalities.”

Another team of volunteer doctors and nurses came from the University of San Francisco to offer their services at the Navajo Clinic in Tuba City.

Meanwhile, in Washington’s coronavirus emergency plan, a total of only $8 billion has been allocated to the Native American nations (instead of the $20 billion requested), to be divided among the 573 tribes—while the distribution, which must pass through the notoriously labyrinthine bureaucracy of the Bureau of Indian Affairs, has proved inadequate and inefficient. “As usual,” commented Jonathan Nez, president of the Navajo nation, “the Indians are always last on the list.” 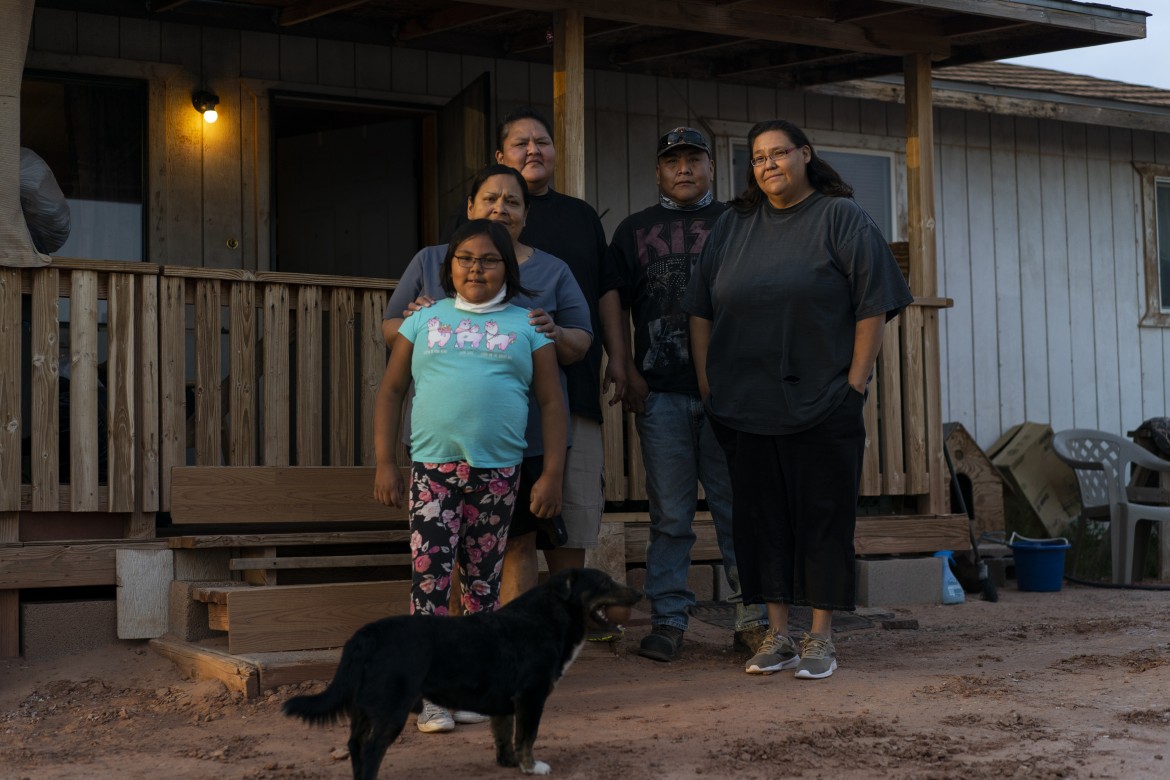 The situation is similar in many other regions, from the Seminole lands in Florida to those of the Cherokee in Oklahoma or the Arapahoe in Idaho, where tribal casinos have been repurposed as triage facilities for COVID patients. Gambling, which has been liberalized in tribal lands since the 1990s, has become the pillar of the native economy in recent decades.

In 30 years, 224 tribes have opened more than 350 casinos, whose proceeds have in many cases alleviated the chronic poverty to which they had been condemned by genocide and confinement. Now they have all ceased operations, depriving 700,000 people of work and hinting at the impending collapse of the already-precarious economies. 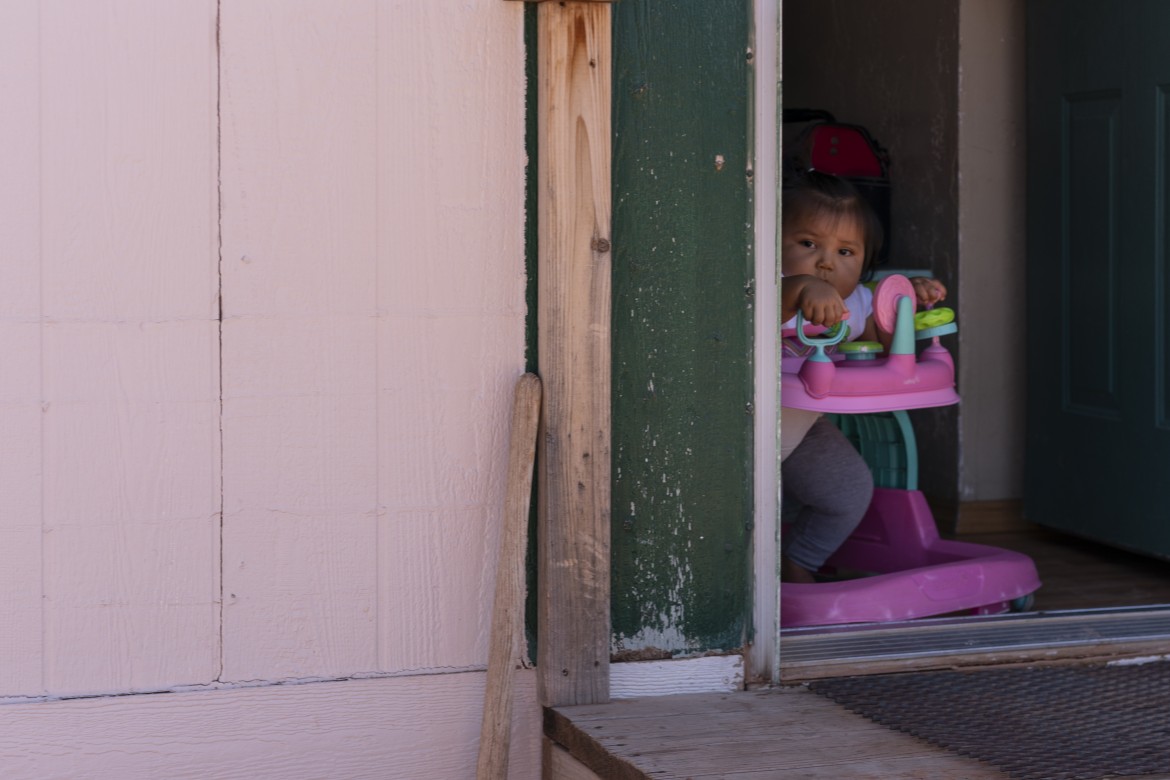 The virus has also exacerbated other old tensions, for instance in Sioux land. Here, the Oglala reservations of Pine Ridge and Cheyenne River have not yet been contaminated, and the Sioux authorities have set up checkpoints to prevent access by outsiders.

However, the governor of South Dakota, Republican Kristi Noem, warned the tribal leader against blocking transit through the reservations, which include Pine Ridge, formerly the scene of the infamous Wounded Knee massacre.

Julian Bear Runner, president of the Oglala, said that the governor’s position once again threatens the sovereignty of the Indian people. 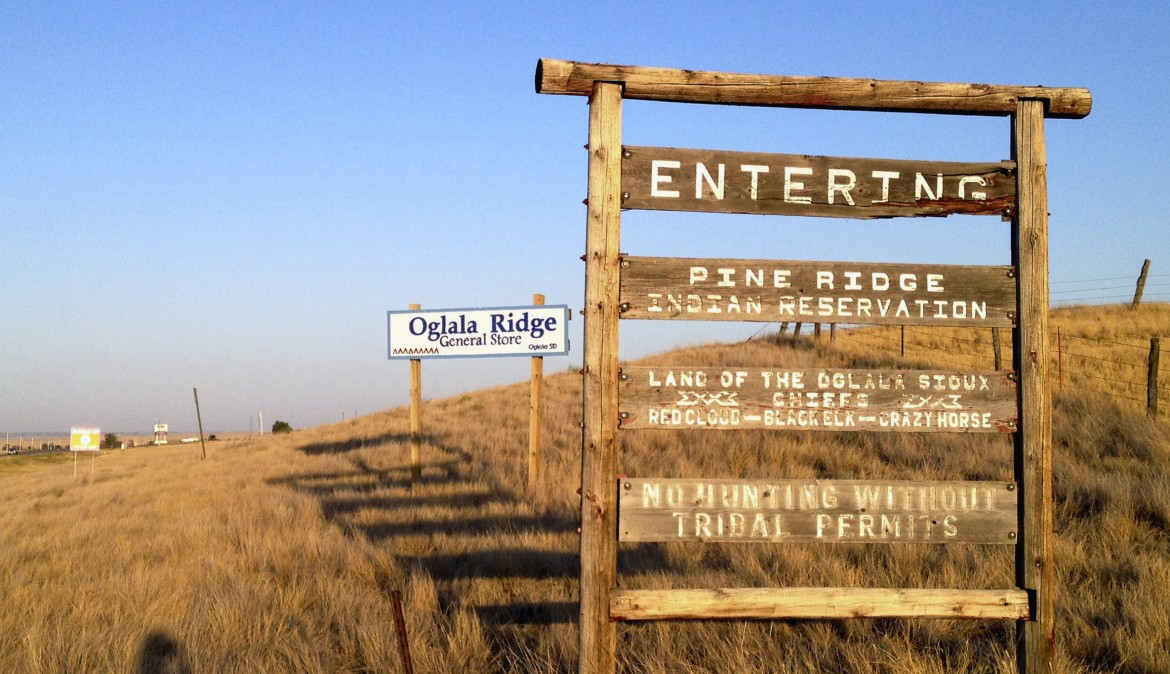 South Dakota, run by Trump-supporting Noem, is one of the states that has never imposed a lockdown, even though it has more than 3,500 cases of COVID. “Due to this lack of judgement and planning of preventative measures … , the Oglala Sioux Tribe has adopted reasonable and necessary measures to protect the health and safety of our tribal members and other residents of the Pine Ridge Indian Reservation,” wrote Bear Runner to Governor Noem on May 8.

“We will not apologize for being an island of safety in a sea of uncertainty and death,” Harold Frazier, the Chairman of the Cheyenne River Clan, told the local newspaper, the Argus Leader. There is only one clinic in operation, with eight beds, on the Cheyenne River reservation, for a population of 12,000. “With the lack of resources we have medically, [isolation] is our best tool we have right now,” concluded Frazier. 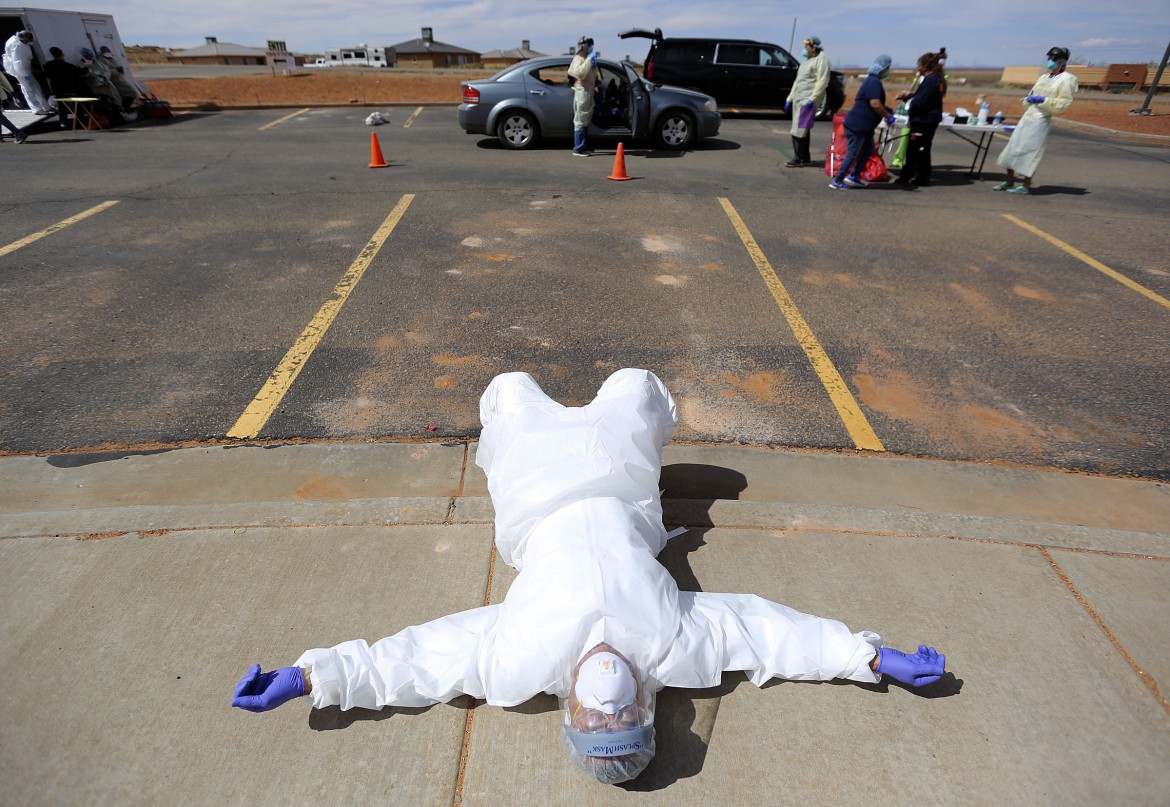 The clash regarding the Sioux checkpoints with the governor, an ally of Trump (who is, among other things, a notoriously enthusiastic advocate of closing borders), are stirring up old memories among peoples whose conquest was accomplished in great part due to being decimated by the pathogens brought in by Europeans.