In the Armenian province of Vayots Dzor, in the south of the Caucasian country, a winding road climbs up Mount Amulsar and ends at the spa town of Jermuk. On the roadside of one of the last hairpin bends, a steel container lies in the shadow of the passing clouds.

A few steps from its entrance, a group of local young people are washing their dishes in the snow, preparing to have a frugal meal. Despite its makeshift appearance, this accommodation is designed to block the activities of an economic power as strong and inflexible as the mountain itself.

The company concerned is Lydian International Limited (Lydian Ltd.), a multinational corporation founded in 2005 in Colorado and headquartered in the tax haven of the Jersey Islands. Lydian Ltd.’s main activity is gold mining, and the job of the 21 Armenians who are taking turns living in the container every week is to prevent them from doing so.

”When Lydian started digging, the water in the village of Gndevaz turned black. So, in light of the revolution, the locals made their voices heard: they didn’t want a mine around here.”

When 32-year-old Arthur Grigoryan starts speaking, silence falls in the part of the container that serves as the living room. There is the crackling of a stove fire in the background; on the wall, a poster depicts Mount Amulsar enclosed between two hands: “We love Armenia and Jermuk. This city is rich in water: the only thing that is irreplaceable. We are not willing to exchange this treasure for gold.” 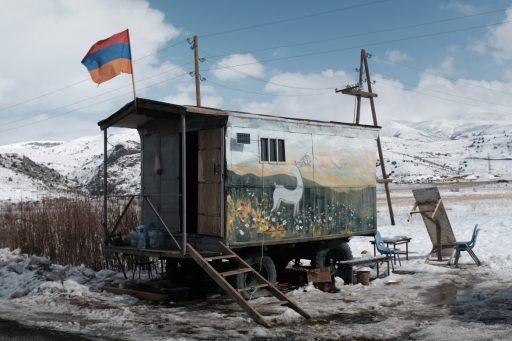 The works for the construction of the Amulsar gold mine began in October 2016, after years of environmental and social impact studies. The city of Jermuk has been a destination for tourists in search of relaxation and spa activities since Soviet times. The terms of the deal gave the multinational company permission to extract gold for 10 years, while Jermuk got 700 jobs. But then, something unimaginable happened.

In April 2018, a velvet revolution brought down the 20-year regime of the Armenian Republican Party (RPA), the regime that had awarded the concession to Lydian Ltd. In the wake of this outburst of democratic forces, a group of residents, supported by the local community, stopped the construction of the mine by setting up four roadblocks on the access roads to the site at the same time. This was the beginning of a long “diplomatic” crisis between the corporation and the Armenian state, which has lasted for almost two years.

It takes three and a half hours by car to go from Jermuk to Yerevan, but it feels like travelling a distance measured in light years. There is little room for people like Arthur Grigoryan in the capital. This is the land of the bourgeoisie that grew up in the West, after the genocide and the rise of the Armenian diaspora in the 20th century. However, there is a red thread that now links Jermuk and Yerevan: the revolution.

Maria Tatisian is an Armenian journalist raised in Canada and editor-in-chief of the EVN Report. The walls of her editorial office are covered with a collage of images from the 2018 uprisings. This is how she describes the Amulsar situation: “It’s as if we said that you can’t come and exploit and pillage Armenia.”

A few hundred meters away is the headquarters of the Socioscope research center. According to the sociologist Arpy Manusyan, “the Amulsar case is connected to two wider issues: on the one hand, the pressure that Armenia is suffering from international corporations; on the other, the necessity of creating an alternative development model to extractivism.”

This is why Nikol Pashinyan, a popular hero during the revolution and now Prime Minister, is unable to find his footing on this issue. At first, he criticized the roadblocks; then he attacked the multinational. Finally, he commissioned a study from Elard, a Lebanese nonprofit, to review the impact analyses conducted by Lydian Ltd. The result was that, although there were risks, the project was deemed feasible.

Anna Shahnazaryan is the leader of the Armenian Environmental Front (AEF), the main organization supporting the occupiers. Sitting in front of a map of the country, she explains: “Many tributaries of Lake Sevan [Armenia’s main source of water] flow from Mount Amulsar. And one of the risks associated with the construction of the mine is that of acid rock spillage,” a phenomenon that occurs due to the interaction between water and sulphate-laden rocks. According to Shahnazaryan, “the mine would pollute the entire region.”

The same issue had been highlighted by Lydian Ltd. from the start. The multinational had proposed a solution called encapsulation. However, an independent analysis published in early 2018 questioned its effectiveness.

The vice-president of Lydian Armenia, Armen Stepanyan, told il manifesto that the impact studies provided by the multinational “are the first and only [in the country’s history] to have been recognized by the International Finance Corporation [IFC, an international organization linked to the World Bank that advises on projects in developing countries] and the EBRD [the European Bank for Reconstruction and Development].”

Although the Elard report gave the green light and the country’s administrative courts ordered the removal of the roadblocks, the barricades are still up, even when the temperature outside drops to -20°C.

“If Pashinyan orders the removal of the roadblocks, the entire city of Jermuk and anyone with a social conscience would flock here. This case doesn’t concern just the region of Vayots Dzor. Nor is it exclusively about Armenia. This is a global issue,” says Grigoryan.

However, Lydian Ltd. was the first to take its case to international forums. In March 2019, prior to the publication of the Elard report, through two subsidiaries set up in Canada and the United Kingdom, the multinational notified the Armenian government about the potential opening of a lawsuit at an international court for the settlement of disputes between states and investors (an Investor-State Dispute Settlement—ISDS—court).

“There is talk of a potential fine of between one and two billion euros,” explains Aleksandr Khachaturyan, a lawyer, former director of the Armenian Center for Strategic Initiatives and partner at TK & Partners. Such a sum would amount to more than half the country’s budget.

However, Khachaturyan sees another problem as well: “The damage goes beyond the monetary cost. Investors who are considering the country as a potential destination today will look closely at this story.” Shahnazaryan (from the AEF) has no doubts: “Lydian’s strategy is a typical one for big companies to extort resources from developing countries.” Did Lydian Ltd. create the subsidiaries in order to bolster its case? When asked, Stepanyan (from Lydian Ltd.) told us that “the company may have more than one reason to make structural changes.” According to him, the costs incurred as a result of the blocks amount to “$101 million.”

From Prime Minister Pashinyan, one hears nothing but a deafening silence. With a few exceptions: in February this year, while on a visit to Berlin, the prime minister said: “If the environmental risks of the Amulsar mining project are manageable, I will support it.” A month earlier, he had said: “There are no legal reasons for the blockades.” However, for Manusyan (from Socioscope), the Amulsar case is “an emblematic conflict of the post-revolutionary phase.”

Amulsar shows that in this country “it is still necessary to fight for one’s rights.” The mine “has divided civil society.” “Before, everyone thought that Pashinyan would listen to the movements”—i.e. those who brought him to power in the first place. Now, everything is less clear.

The mining business in Armenia dates back to the second half of the 18th century. According to data for 2017, the country awarded mining licenses to more than 400 companies, 28 of which are involved in mining metals. The sector employs around 10,000 people, while the average wage is around $700 (twice the national average). In 2016, the share of national GDP created by the sector was 2.6%, compared to an industrial export share of 40%.